April 24, 2020
I bought a book before three months,and the name of the book is KASHMIR RAGE AND REASON

The name of the writer of the book is GOWHAR GEELANI (you may known after looking at the image of the cover page of the book). Interestingly GOWHAR GEELANI is an inhabitants of Kashmir who knows Kashmir very well from his childhood.Gowhar Geelani is a journalist who travelled various parts of India ,he is a political analyst and television commentator .The Kashmir issue is a very controversial issue between the countries named India and Pakistan since 1947.Both the countries demanded Kashmir as its integrated part .But most of the people of Kashmir demand sovereignty and they doesn't wanted to be part of neither India nor Pakistan(according to the book).Pakistan sponsored proxy war against India.

This book named KASHMIR RAGE AND REASON  exposed various subjects like the Dreams of Teenagers ,Dreams of Youths of Kashmir and about the feeling of life under the military rule.He wrote about the beautiful past of Kashmir where there were no tensions and no military rules .
Gowhar Geelani wrote about the loss of human
resources of Kashmir under the impacts of militancy. He wrote against the use of pillets by the military forces against protester's or mob in Kashmir ,he predicted about how the kids and babies are injured by Pillet's fired by government forces and he urge government to stop use of Pillet's .If you read about the stories of bad impact of the use of Pillet's to the protester's than your mind will filled with anxiety .Gowar Geelani wrote about some incidents and he mentioned it as brutal response against the some of the peaceful civilian uprisings by Indian administration in Kashmir. 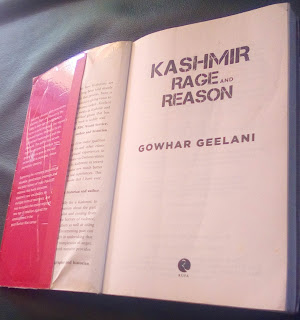 He wrote "SUCH MILITARISTIC MESSAGES FORCED THE PRESENT GENERATION OF KASHMIR TO DO A RETHINK ".Does he means that most of the youth are attracted to EXTREMISM  because of the atrocities committed by government forces against the indigenous people's of Kashmir!He also wrote about the Kidnapping and rape cases committed by Indian Army in Kashmir. He described about some teenage  boys who were lifted by government forces at nights without any cause and those teenage boys never come back to home  because they disappear and their family members are still waiting for their returning. The writer also described the historical facts about Kashmir. According to Gowhar Geelani "" Kashmir is an issue that involves politics ,territory ,borders ,religion, nationalism ,democracy ,ethnicity ,identity and various other factors.. Ultimately we can say that this book named KASHMIR RAGE AND REASON is a worthy book if someone interested to know more about the modern Kashmir and its problems.
This book is published by Rupa Publications India Pvt.Ltd. and the owner of the Copyright of this book is GOWHAR GEELANI(the writer of the book).
READERS MAY VISIT MY ANOTHER WEBSITE
www.travelsliving.in

August 08, 2020
" The Dog Care" is a hand book for dog lovers who loves dogs  to adopt as a pet animal .Almost all the peoples of this world like to be a owner of a dog. Dogs are best friends of human beings from the ancient history of mankind. Various information's are there in this book about the dog's. At first I didn't knew more about dogs ,but this hand book regarding dogs astonished me when I read the book .The world of dog's is a very mysterious .This book is a very valuable guide book. If you read this guide book than you would know the history of dog's and about it's species. This book will guide you to owing a dog whether it should be big or small.This book will also help to guide to  take care of puppies and training.Informations about vaccination is also available in this book. Information about bedding and bedtime of a puppy and also about exercises are available in this guide book. The writer of the guide book also provided valuable information about the
9 comments
Read more