August 03, 2020
GANDHI is the name of the book which  is written by Ramachandra Guha . 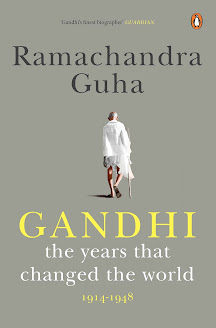 This book is written to depict the activities of Gandhi from 1914 to 1948 .There are several unknown facts that we do not know .We were taught briefly about Gandhi in Schools and there are also some movies related to Gandhi ,but those movies  could not display the entire activities of Gandhi .Life of Gandhi is like a vast sea which does not have boundaries ,the writer of this book is trying his best to display about the life of Gandhi to the world communities by his book .
If you read the book than you will know Gandhi's role in the reformation of social and public life in India.This book depicts about the eminent  personalities in Gandhi era in India who supported and helped Gandhi in India's freedom struggle ,one amongst them was educationist and politician named Gopal Krishna Gokhale and his was one of the great mentor of Gandhi.The book also mentioned about those personalities about whom we know in very narrow extent.
Gandhi was not fought only against the colonial power in India but also fought against the racism and superstitions in India. Gandhi said in his speech" IT WAS NO PART OF HINDUISM TO HAVE IT'S HOLD A MASS OF PEOPLE WHOM I WOULD CALL "UNTOUCHABLES". IF IT WAS PROVED TO ME THAT THIS IS AN ESSENTIAL PART OF HINDUISM ,I FOR ONE WOULD DECLARE MYSELF ON AN OPEN REBEL AGAINST HINDUISM ITSELF "
This book named GANDHI should be read by every person because Racism rises again in 21st century,because such kind of incidents like Zihad by some people related to the religion Islam against other religions to spread hatred ,trying establish white supremacy over black skinned people by some white people which led to the killing of "George Floyd "proved the importance of this book related to the life of Gandhi .Gandhi was a person who believed on non violence ,his fight against caste system in society ,racism in society and fight against religious conflict made him extraordinary.Gandhi was in favour of emancipation of women .If you  read the book than you will know about the Gandhi's contributions towards the emancipation of women in Indian society.
There are some sentences written by the author about Gandhi which are heart touching and it's inspires readers to think differently about the political independence ,for instance the author wrote "FOR GANDHI ,POLITICAL INDEPENDENCE MEANT NOTHING AT ALL UNLESS IT WAS ACCOMPANIED BY RELIGIOUS HARMONY ,CASTE AND GENDER EQUALITY ".
Readers will know about the struggle of Gandhi which led India from autocracy to democracy.It is really astonishing to know that how a ordinary man like all of us fought against colonial power with the weapon of nonviolence and united the people of all classes of India although the societies of India were divided into class ,caste and religion and racism.It was a very difficult task .
The writer himself wrote about the book "THIS BOOK IS A FREE STANDING SEQUEL TO GANDHI BEFORE INDIA,MY ACCOUNT OF MOHANDAS K.GANDHI'S YEARS AS A SCHOOL BOY IN RAJKOT AND A LAW STUDENT IN LONDON ,AND ,ABOVE ALL ,OF HIS DECADES AS A LAWYER ACTIVIST IN NATAL AND THE TRANSVAAL .THAT BOOK ENDED WITH GANDHI'S DEPARTURE FROM SOUTH AFRICA IN 1914,THIS BOOK TAKES THE STORY UP TO GANDHI'S DEATH IN 1948." As a reader I think everyone should read the book to earn the value of non violence and also learn to destroy racism as Gandhi destroyed .

July 07, 2020
MY EXPERIMENTS WITH TRUTH is autobiographical book written by the great freedom fighter of India late M.K GANDHI. The world communities known M.K GANDHI as the worshipper of humanity and non-violence . His fought against colonial powers and against racism with the weapon of non-violence introduced him as an extraordinary person to the world community.This greatman always worshipped truth and justice to all .His contributions towards the world communities always be remembered.   But in 21st century some Hindu fundamentalists are trying to defame the image of M.K Gandhi .The IT cells related to these Hindu fundamentalists produce wrong information on internet and social media platforms and they are trying their best to defame M.K .Gandhi.    If you read the book than you will have a vivid imagination of the Indian society in the era related to Gandhiji's life ,from his Childhood to his elder age .The book depicts about  the superstitions and about the  evil acts like child marriages
Post a Comment
Read more