You Don't Own Me

Dear readers today I bought a book and the author of the book is MARRY HIGGNS . The story of the book is related to suspence ,emotions , relationship etc . 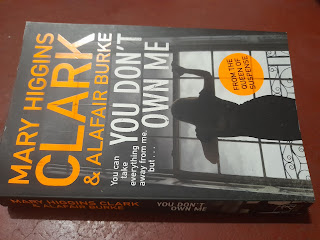 The story will lead to its readers to the  investigation of murders and   facts of suspect by the public to Kendra(her husband was murdered)on the basis of speculations by the sensational coverages by media or from other sources reminds about me about media trials to accuse someone without proper evidence. Readers will  also in puzzle  about Kendra because sometimes readers will feel that Kendra hired some one to kill her husband , because according to some people she went to ATM frequently to withdraw money from the joint account and met a tough guy there and talked with her frequently and after the murders that tough guy vanished from the scene.

The another character Laurie who is a host of television show named "UNDER SUSPICION".This television show investigate crimes and telecast it in the show. Various people contact them who's relatives are murdered.Laurie and her team approach to  Kendra to get her interview regarding her husband murder .But she was scared to sit for interview, and such hesitation of Kendra put question mark at Kendra's involvement in the crime.

It's also interesting to read about the life style of the characters of the  team of the television show which is related to crime and it's also interesting to read about their team work and about their personal lives. Kendra's boss and school friend Mr.Steven Carter and introduction of Mr.Steven Carter to Laurie by Kendra at a restaurant's bar create's some doubts at Kendra as an assistant of the conspiracy to her husband's murder case , because Laurie came to take her interview in the restaurant bar and Kendra told that she will come alone to give her interview to Laurie.

There are various characters in the book which made the book intersting to read the book . Initially it may difficult to understand the way of the story to its readers like some other books, but the story of the book created more sensation when readers started to turn it's pages .

New York Times and The Publishers of Weekly praised  the story of the book .

This book is published by "SIMON AND SCHUSTER UK LTD

August 08, 2020
" The Dog Care" is a hand book for dog lovers who loves dogs  to adopt as a pet animal .Almost all the peoples of this world like to be a owner of a dog. Dogs are best friends of human beings from the ancient history of mankind. Various information's are there in this book about the dog's. At first I didn't knew more about dogs ,but this hand book regarding dogs astonished me when I read the book .The world of dog's is a very mysterious .This book is a very valuable guide book. If you read this guide book than you would know the history of dog's and about it's species. This book will guide you to owing a dog whether it should be big or small.This book will also help to guide to  take care of puppies and training.Informations about vaccination is also available in this book. Information about bedding and bedtime of a puppy and also about exercises are available in this guide book. The writer of the guide book also provided valuable information about the
8 comments
Read more