Wednesday, June 17, 2020
TIGER TIGER BURNING BRIGHT it was a poem that liked to read and hear when I was a 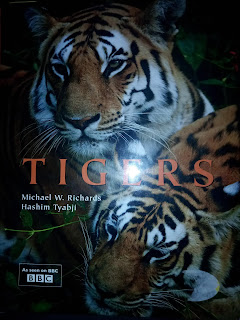 teenager.Tigers are majestic ,elusive and solitary animal, which is carnivorous.Tiger creates fear by its fearful sound that its creates .Tigers are very skilful hunter who help to maintain ecological balance.Tigers also looks very beautiful .Tigers hunts ungulates in the forest and creates ecological balance,ecological imbalances are started in some countries because of the extinction of tigers in those countries.
There are some forests in India where tigers are in existence although its in the verge of extinction in the world.Some organizations are trying to save this extraordinary creature from extinction.
A team from a from country arrived in India to make a documentary and write a book on Indian tigers .The team had filming the tigers at a  reserve forest of India and they enthralled by the experiences in the forest .The readers will know about how the latest technologies helps to research on wildlife ,specially in the matters of filming the wildlife.
The team met a domestic elephant who knows how to roll a camera and place it in a proper place to shoot the tigers ,it was quite astonishing and its proved that how elephants are so much wise and intelligent.
The lifestyle of tigers are very elusive and it's very very difficult to find them in the forest ,it's need hardship to find a tiger in a forest because of its solitary attitude and it's unique colour.Tigers are very intelligent and therefore tigers became the very successful hunters in wildlife.
Tigers are very sensitive in the matter of the taking care of its family.The writer wrote about it in the book about it and it's very interesting to read .The writer wrote "AN EXAMPLE FROM BANDHAVGARH DEMONSTRATES THAT PATERNAL TIGER AFFECTION CAN GO FURTHER THAN MERE TOLERANCE .SITA ,A FAMOUS AND MUCH FILMED AND PHOTOGRAPHED TIGRESS ,HAD ALREADY TIRED OF HER FIRST LITTER OF TWO CUBS ,AFTER SIXTEEN MONTHS OR SO AND BEGAN TO ACTIVELY DRIVE THEM OFF.STILL UNTUTORED IN THE ART OF HUNTING ,THEY WERE TOO YOUNG AND INEXPERIENCED TO MAKE IT ON THEIR OWN.THEY REMAINED IN THE NATAL AREA , ALTHOUGH SITA MADE A FEW TRAINING EFFORTS ,IT WAS CLEARLY THE FATHER'S SHARING OF HIS KILLS WITH THE YOUNGSTERS THAT HELPED THEM SURVIVE.THIS BOND BETWEEN FATHER AND OFFSPRING DEMONSTRATES THE RICH VARIETIES OF BEHAVIOUR IN WHICH TIGERS INDULGE AND PERHAPS REFLECTS VARIATIONS IN INDIVIDUAL PERSONALITY AND CHARACTER".
Now readers of my blogs understand that not only human's but tigers have also emotional bondage with their relatives although they are solitary animals.Wildlife lovers may collect lots of information's of the characters of tigers if they read this book and the guidance of the book is very valuable to any wildlife explorer.Photos of tigers in wild are very beautiful in the book .The photos of the book depicts about the hunting ,mating and companionship between tigers , families of some tigers are also published in the book. Photos of cubs with their families are very beautiful and enthralling.Tigers playing with water is also a very beautiful moments which is depicted by the photos .
The writer also explained about the conflicts between humans and tigers which lead the tigers into extinction .There are many more information about the life of tigers in the book,this book taught us about the importance of tigers in human lives.If you are a wildlife lover than you must read the book.
READERS MAY VISIT MY ANOTHER WEBSITE :
www.travelsliving.in
Next Review

Wednesday, July 01, 2020
Before writing the review of this book I want to tell you about why I had selected this book to review ! I became emotional when I found this book it reminded  my memorable moments with BOONDA(the male cat )who was a street cat and he took shelter at our home and he became a part of our life .He was a witty cat who suddenly disappeared one day and made me depressed. BOONDA ( the street cat) My entire family members miss him .He was a very smart and intelligent cat I ever found .Only God knows what's wrong happened to him .But I still feel his existence in my mind and I feel like he is somewhere nearby .Most of the people hate street cats and don't care for them ,but I love street cats very much . Absence of BOONDA made me curious to know about the lives of street cats.Boonda had very extraordinary senses ,he knew how to make friendship with most of the persons very well ,he knew the ming of breakfast ,lunch and dinner time at our home and he appeared on definite time to have hi
Post a Comment
Read more

Wednesday, May 06, 2020
Imagining India is the book written by the founder of first IT company of India named NANDAN NILEKANI.Mr.Nilekani  was also the chairman of UNIQUE IDENTIFICATION AUTHORITY OF INDIA.He was also in the post as co-chairman of INFOSYS TECHNOLOGY LIMITED. Imagining India is a book which is based on the true facts of India's past and present of India . India's development by various reforms in the field of social and economic reforms , reforms in the agricultural and various sectors ,advent of IT sectors and it's possibilities are the key ingredients about whom the book discuss .The economical and social conditions of India  was not good after the independence,even various conflicts were happened in states which is not imaginable ,if you read this book than you will have a better idea that this country named India developed by various rough and tough up and downs. This book named IMAGINING INDIA depict about the differences and development from the past to the present Of I
2 comments
Read more

Contact Us If you have any query regrading Site, Advertisement and any othe