June 25, 2020
War Cry is a novel based on history and this book is written by WILBUR SMITH . There are several characters portrayed by the writer in the book which are related to the colonial era 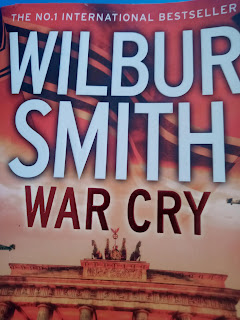 and the era of Second World War. The geographical sites to whom the story is located are South Africa ,Kenya(where British Colonies were located on that particular period and the Germany of Hitlers era when the most of the Germans were attracted to NAZI ideology.
The book predicts the realities of the families of war heroes which were related to high rank in armies and who were enjoyed a lavish lifestyles ,some war heroes were not dedicated and faithful to their wives and some war heroes belong to  high ranks in army were so much dedicated to their wives and families.The book also predicts about the huge properties offered by the governments of those countries to whom they belong to.
The writer portrayed the lifestyle of rich British peoples at a British colony of Kenya .The writer portrayed a character whose name is Leon ,Leon became the owner of a colony in Kenya established by British government.Leon and his wife both are war heroes.Leon love his wife Eva very much and dedicated his life to Eva.Leon become a very rich person by dint of his hard work and he is a very social person and he is not a racist(racism between Black and White was on full swing in that era).The writer also created some characters of businessman which are related to Germany and these characters depicts the hatred towards the Jew's and also depicts the suffering of Jew businessman's by the hands of German's.
Solomon is the character which is a Jew by blood but he and his family does not follows the traditions of Jew ,they thought themselves as German and follow the rituals of Germans and assimilate with the German society. The writer wrote about Solomon " HE HAD FOUGHT AS PROUDLY AND VALIANTLY FOR GERMANY AS ANY MAN IN THE KAISER ARMY AND,AS HE MIRACULOUSLY SURVIVED WHILE SO MANY OTHERS DIED AROUND HIM ,HE HAD RISEN FROM A HUMBLE LEUTNANT TO OBERST ,OR COLONEL ,IN THE PROCESS.SOLOMON HAD SERVED THE 15TH BAVARIAN INFANTRY DIVISION ,PART OF THE FIFTH ARMY UNDER CROWN PRINCE WILHELM OF GERMANY ,THE KAISER'S HEIR.THE PRINCE'S HANDWRITTEN LETTER OF COMMENDATION , PRAISING SOLOMON FOR HIS GALLANTRY ".
But that Brave Solomon who fought for Germany face discrimination because he and his family was related to  Jew by blood in Hitler's era,and it's very unfortunate for him,
readers will feel sympathy towards Solomon.
Whenever a story related to our mind then generally a picture come to our mind about gun fire ,dropping of bombs ,dying of soldiers and public and the panic created by wars ,but the writer of this book draws a clear picture of those soldiers who take care of the dump of ammunitions and other materials of their troops.The writer creates a character named Francis who take cares of arms and ammunitions and other supplies to his troop.He also portrayed the use of poisonous gas in wars and its impact on human health.  The writer write about his plight when a bomb was dropped nearby the troops storage ,the writer wrote" BY COMPLETE CHANCE A STRAY TURKISH SHELL EXPLODED NEAR THE DUMP WHERE THE GAS CANISTERS HAD BEEN PILED AND A PIECE OF SHRAPNEL FROM THE SHELL PIERCED ONE OF THE CYLINDERS.FRANCIS COURTNEY HAD BEEN INSPECTING THE DUMP AT THE TIME ,TO CHECK THAT THE RECORDS SHOWS THE CORRECT QUANTITIES OF MUNITIONS IN STORAGE .HE HAD IN FACT BEEN WALKING PAST THE CHLORINE CYLINDERS WHEN THE SHELL LANDED .THE EXPLOSION THREW HIM ,SHOCKED BUT UNHURT ,TO THE GROUND JUST AS A HEAVY STREAM OF CHLORINE WAS EMITTED FROM THE RUPTURED CANISTER.
A BURNING PAID RIPPED THROUGH HIS EYES AND THROAT ,A GIANT FIST SEEMED TO CLAMP ITSELF AROUND HIS CHEST AND HIS LUNGS SEIZED UP ,SO HE FELT AS HE WERE SUFFOCATING .HE SOMEHOW MANAGED TO STAGGER TO HIS FEET AND STUMBLE AWAY FROM THE GAS ,AN ACTION THAT SAVED HIS LIFE .EVEN SO HE WAS SEIZED BY SPASMS OF COUGHING AND RETCHING .HIS EYES WERE BLINDED BY THE TEARS PRODUCED BY HIS DESPERATE BODY AS IT SOUGHT TO REMOVE THE  IRRITATION .HIS MOUTH, MEANWHILE ,WENT TO THE  OPPOSITE EXTREME:HE WAS PERCHED WITH THIRST AND HIS TONGUE FELT THICK AND FURRY .FRANCIS COLLAPSED TO THE GROUND WHERE HE WAS FOUND BY A STRETCHER PARTY,LYING ON HIS SIDE WITH HIS HEAD ACHING AND HIS MOUTH OPEN IN A DESPERATE ATTEMPT TO LET THE FLUID IN HIS LUNGS FLOW BACK OUT OF HIS BODY .HIS FACE WAS PALE GREENISH YELLOW ,AND OVER THE NEXT FEW HOURS OTHER PARTS OF HIS BODY PUT ON A MACABRE DISPLAY OF VIVID COLOUR AS THE GAS AND THE OXYGEN DEPRIVATION SLOWLY GAVE WAY TO A VIVID ,VIOLET RED COMPLEXION,WHILE HIS FINGERNAILS WENT FROM A HEALTHY PINK TO A DEATHLY BLUE .HE WAS EXHAUSTED AND YET RESTLESS ,STRUGGLING FOR BREATH ,SEIZED BY THE ANXIETY ,BORDERING ON PANIC ,THAT COMES WITH AN INABILITY TO BREATH .EVERYTHING HURT ,HIS WHOLE BODY WAS ERUPTING IN PROTEST :COUGHS,VOMIT AND DIARRHOEA ,ONE AFTER ANOTHER IN AN ENDLESS,RANDOM SUCCESSION."
The other subjects like the conflicts between the parents and sons who became the cause of separations ,the ego who became the barrier between son and father which never let them to be united ,selfishness ,but their professions as a businessman compelled the brothers to be united to fulfil their desires in business .The characters portrayed by the writers in this context also send a message to the society about generation gap and conflicts between brothers for money and business.The book also depicts the structure of businesses and the tactics to perform by the brothers on the era of war.
This novel named WAR CRY  is worthy to read with its subjects which includes ego ,humanity ,selfishness ,politics ,businesses of the war era.
NEXT REVIEW

July 07, 2020
MY EXPERIMENTS WITH TRUTH is autobiographical book written by the great freedom fighter of India late M.K GANDHI. The world communities known M.K GANDHI as the worshipper of humanity and non-violence . His fought against colonial powers and against racism with the weapon of non-violence introduced him as an extraordinary person to the world community.This greatman always worshipped truth and justice to all .His contributions towards the world communities always be remembered.   But in 21st century some Hindu fundamentalists are trying to defame the image of M.K Gandhi .The IT cells related to these Hindu fundamentalists produce wrong information on internet and social media platforms and they are trying their best to defame M.K .Gandhi.    If you read the book than you will have a vivid imagination of the Indian society in the era related to Gandhiji's life ,from his Childhood to his elder age .The book depicts about  the superstitions and about the  evil acts like child marriages
Post a Comment
Read more